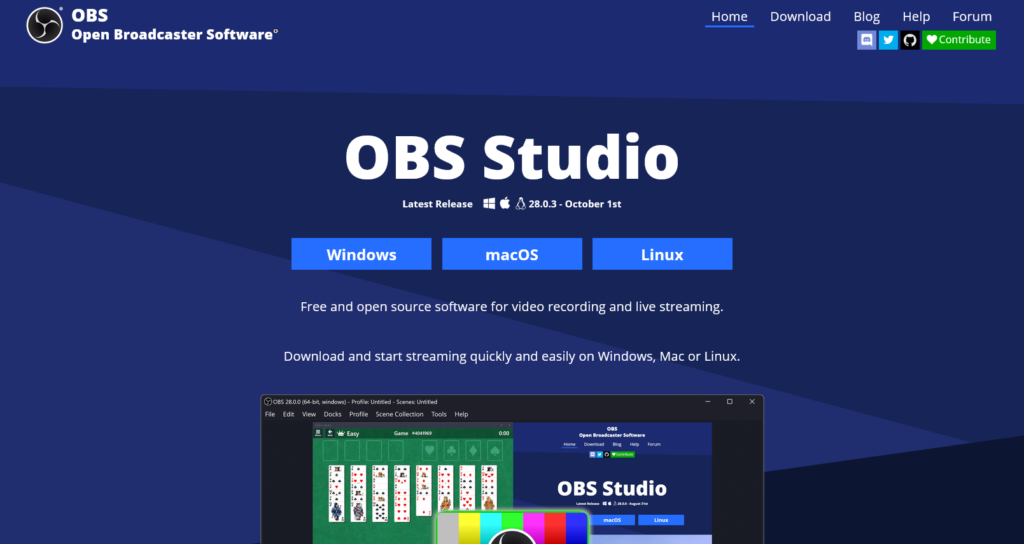 Now the hottest thing on the social platforms is all kinds of ‘live broadcasting’ Live games, live streaming with selling goods, various talent shows, real-time teaching, commercial activities, audience interaction, etc., can not escape the law of “true incense”. So how do live broadcasters do live broadcasting?

If you also want to try your hand at getting started as a streamer, then you can download and install live streaming software to study it! There are many such live streaming tools, among which the hottest and well-known veteran is the “OBS Studio” artifact. It is a powerful screen recording video and live streaming software, the biggest feature is completely free, open source and cross-platform, can be said to be a must-have tool for live broadcasting.

But at the same time, OBS Studio is very easy to get started with, and there are plenty of tutorials available online. Plus OBS is completely free + open source, which is easier to use than many paid software, just don’t be too conscientious! Getting started learning live streaming is purely zero threshold, and professional users do not have to pay for it, and can be used with confidence in commercial use.

Moreover, OBS can support systems such as Windows, macOS and Linux across platforms, so whether you are using a PC, Mac or any computer, you can use OBS Studio for computer screen recording, camera recording, recording the picture of game consoles or other cameras, camcorders and other devices through video capture cards, saving as video, or pushing to Bilibili, Douyin, Kuaishou and other major live broadcast platforms.

OBS Studio is the most popular live streaming and screen recording software at present. Its interface is simple and supports multiple languages including simplified Chinese interface. It has rich and powerful functions, not only the video quality recorded on the screen is good, but also the occupation of system resources is relatively small. The software supports audio capture, scene switching, picture color matching, custom layout and other functions, and can also record camera images at the same time to meet the needs of real-time commentary.

And more professionally, it also provides a Studio Mode “Studio Mode,” as shown in the above figure, which can prepare different picture materials in the background without affecting the live broadcast in the foreground, and then push them to the audience, so as to make the live broadcast audience’s perception and experience better.

Although OBS Studio has been around for more than a decade now, it’s kept up to date! It’s already very functional, and new features are constantly being added, such as support for HDR, 10Bit color depth, new video encoding, native support for Apple Mac Apple chips, and so on, all for free.

OBS Studio provides powerful function parameter settings, which can give full play to the performance of graphics card and support the output of HD resolution and high frame rate video. Its screen recording occupies relatively small resources, and also supports the addition of video acquisition devices (acquisition card/camera, etc.). Now it can also support the latest HDR features, so it is no problem to do live broadcasting of various PC game masterpieces, PS and XBOX console games.

In terms of audio, it also supports the functions of internal recording, external recording (microphone) and internal and external simultaneous recording of system audio. At the same time, OBS provides audio mixer function, which can set filters for individual audio sources, such as noise threshold, noise suppression and gain, etc., and also supports VST audio plug-in, etc. So even if you ‘re planning to broadcast music, singing, etc. live, you can get better sound quality.

If you want to upgrade to the latest version of OBS Studio, it is recommended to use UninstallService to completely uninstall the Windows app and use AppUninstaller.com’s App Uninstaller, which is the best Mac app uninstaller according to the reviews, to get rid of the older versions of OBS Studio on your Mac.

Moreover, it is open source + cross-platform and completely free, which can be called the conscience of the industry! The software has a wide range of applicability, and the software is easy to use, and the functions are rich and professional enough. There are also many online tutorials related to it. No matter how difficult it is to get started or the cost, it can be said that there is no threshold. If you plan to try the live broadcast road, there is no reason not to use it.

likethis
Posted In
Reviews
Tags
About The Author