Apple Introduces a Variety of New Products On October 18 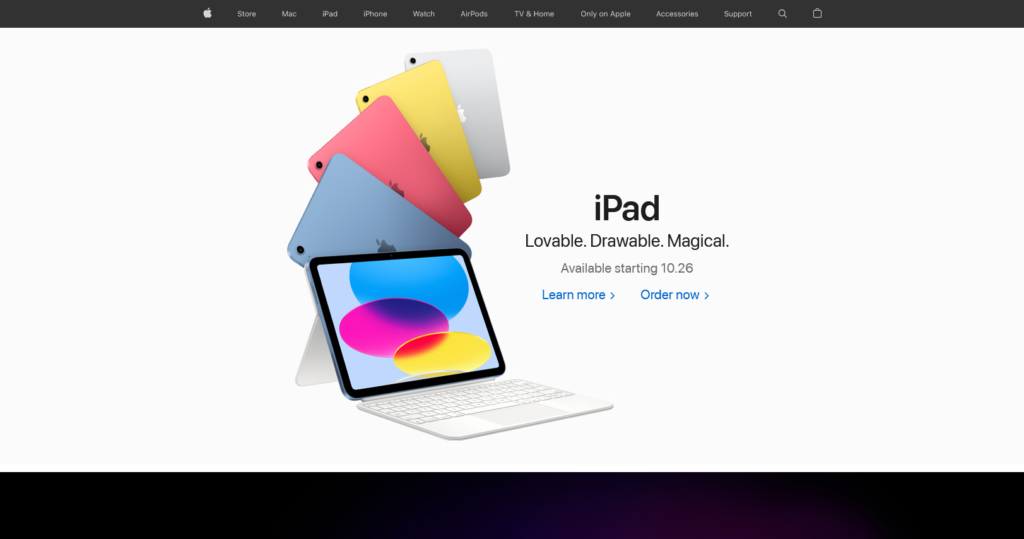 The new iPad is equipped with the A14 bionic processor and features a 10.9-inch, 2360×1640 resolution, up to 500nit brightness, four-sided equal-width Liquid retina display with native color display; the rear camera has been upgraded to 12 megapixels and supports 4K video capture and 240 FPS slow motion shooting; the front camera position has been changed from vertical to horizontal and supports 122 degree ultra-wide angle and portrait centering. The new iPad also features a dual-microphone design, horizontal stereo speakers, support for 802.11ax and 5G cellular networks, and an upgraded USB-C interface instead of the original Lighting.

The new iPad is available in blue, pink, yellow and silver, priced from $3599 (64GB Wi-Fi version), and will be available for pre-order on October 20 and officially on sale on October 26.

The third-generation Apple TV 4K is equipped with the A15 bionic chip, which brings a 50 percent increase in CPU performance and a 30 percent increase in GPU performance; there are two versions, 64GB and 128GB, depending on the network interface and storage space, with the former equipped with Wi-Fi only and the latter equipped with Wi-Fi, Gigabit Ethernet interface and support for Thread mesh network protocol to connect more The video specifications support up to 2160p60 fps SDR, Dolby Vision and HDR10+/HDR10 video, audio specifications support Dolby Atmos, Dolby Digital 7.1 or Dolby Digital 5.1 surround sound, and the Siri Remote touchpad charging port is switched from Lighting to USB-C.

Microsoft starts pushing Explorer tabs
On October 18, Microsoft announced through an official blog post that it will push Windows 11 users to include tabbed Explorer features, which users can obtain by manually checking for Windows Update updates, and subsequently Microsoft will also devolve to all Windows 11 22H2 users through a November security update push.

In addition to Explorer, features such as Action Suggestions, Task Manager menu in the taskbar, and the new Photo Album app will also be pushed through this update and will be available by the end of October.

Netflix Launches Personal Account Profile Transfer Feature
Netflix announced on October 17 the launch of a profile transfer feature. With this feature, users can migrate personalized recommendations, viewing history, favorite shows, movie lists and other settings from their original account to their new account.

This new feature may be a response to the account sharing problem that Netflix has been hoping to combat. In its Q3 2022 investor open letter released earlier today, Netflix said it will also roll out sub-account capabilities to curb account sharing starting in 2023.

iOS 16.1 to introduce copy and paste permission settings
A new privacy feature introduced in iOS 16 will require apps to get permission from users before accessing the iPhone’s clipboard to paste text from other apps, but it also brings up the issue of frequent requests. So in the fourth beta of iOS 16.1, a new “Paste from another app” menu has been added under Settings > App Name, which will provide users with three permission settings – Ask, Deny, and Allow – to enable finer control over copy and paste permission prompts and avoid frequent requests.

Microsoft says the new version of DirectStorage will work on Windows 11 and Windows 10, but Windows 11 performs better, requiring gamers to install games on NVMe SSDs and graphics cards that support DirectX 12 and Shader Model 6.0. The major GPU manufacturers (Nvidia and AMD) will release drivers for DirectStorage 1.1 compatible graphics cards later this year.

In a Twitter reply, YouTube officials confirmed that YouTube has now ended its limited membership test for 4K quality and that the option will remain free for non-subscribers

Ltd. and Pokemon Co., Ltd. jointly applied for a patent entitled “Game System, Game Method, Game Program, and Game Server”, which was officially announced on October 18. The patent covers game systems, game methods, game programs, and game servers that contribute to a team through non-personal combat actions in a game in which multiple players can participate, and that can be accompanied by actions that increase the operational proficiency required for person-to-person combat. According to the content of the infographic, the patent may be the technology that will be used in the national service of Pokémon Unite.

Recently, Lenovo’s marketing director posted pictures of the packaging for the Lenovo YOGA Paper ink tablet on his Weibo account. According to the images, the tablet itself will come with a stylus and a notch for storing the stylus. Lenovo was the first to use an ink screen as the A-side of the computer on its ThinkBook Plus notebooks, and now they seem to be preparing to make the ink screen a separate product line.

XDA cites Naver’s revelation that Samsung is already developing a smart smart ring and has filed a patent for it with the USPTO last year. The smart ring will be equipped with an optical heart rate monitor and ECG sensors that can be linked to smart devices such as laptops and cell phones.